. . . coach Paul Petrino felt for the secondary. Montana quarterback Dalton Sneed made it look as easy as it probably was. “Nothing new, you know,” Sneed said. “Just go move the ball down the field.” Without pursuers to cool him down, he did so without fear. Petrino had stressed all week the importance of a consistent pass rush in the lead-up to Idaho’s eventual 42-17 Little Brown Stein loss Saturday to No. 6 Montana. It’s because when it comes to these Griz, a comfortable Sneed spells disaster for opposing defensive backfields — he was bombing them deep and zinging them shallow, with either kind of throw going for big yardage.

“You can’t give anybody that much time, especially a quarterback that good,” Petrino said of Sneed, who went 17-of-27 for 241 yards and a score, and was the impetus behind five UM scoring drives. “I don’t know anyone who’d wanna play secondary then. That makes it very tough on those guys.” UI’s defensive front, which had tallied 19 tackles for loss in its previous two games combined, had just one here in hostile territory. It was a duo sack by Nate DeGraw and Christian Elliss midway through the third quarter.

Aside from that, Montana’s pass protection, a question mark before the season, was near-impenetrable. Sneed caught fire right away, and maintained it. The proficient runner didn’t need to try, because he mostly had all day, and was only hit three times as he threw. Petrino pointed to three open third-down conversions on passing plays that were crucial in the result. In each, Sneed had time to scan before coverage eventually was lost on a check-down option, waiting over the middle or in the flats. On the contrary, UI’s defensive front bottled up the rushing game and begged UM to throw. The Grizzlies averaged a measly 2.8 yards per rush and had just 101. Because of the Vandals’ first-quarter roughing up of UM backup Cam Humphrey — replacing the injured Sneed to begin the game — and because of Montana’s inability to get past the linebackers, the Griz’s offensive output of 392 yards was their lowest in a win this year. UM was averaging 473.6 yards per game, a top-10 mark in the Football Championship Subdivision. “Those guys on defense,” UM coach Bobby Hauck said of UI’s coaching staff, “they did a great job having them ready to play us.”

On the other side, Vandals quarterback Mason Petrino had another turnover-prone outing in Big Sky play, committing four. Three were thanks in part to Montana controlling the line of scrimmage after halftime, and Petrino’s tendency to let the ball swing freely in his hand. “Early on, it seemed like we were winning those one-on-one battles, or the pass-protection battles,” Paul Petrino said. “Then as the game went on, they started winning them.”

Mason Petrino had perhaps his poorest day, but some of it can be attributed to a persistent swarm of defenders he faced, which got him for five sacks. When he did have time, Petrino’s receiving corps — lacking Jeff Cotton — toiled to get open, and if they did, the limited senior quarterback didn’t have the velocity to push it downfield. “We didn’t protect long enough,” Paul Petrino said. UI’s offensive front also committed four false-start penalties in a span of two short series, ending drives early and handing UM momentum, which it capitalized on to take a 14-10 lead with 1:24 until halftime.

COTTON/CARTER FACTOR — Consecutive plays with about four minutes left in the second quarter sunk the hearts of the Idaho faithful. On first-and-15 from their own 37-yard line, the Vandals handed off to Aundre Carter, who was piled up in the backfield. He stayed down for a brief moment before walking off the field. On the next play, Mason Petrino threw one 20 yards down the near sideline for Cotton, one of the Big Sky’s best receivers, who tried to adjust to the ball in flight, but came up short and appeared to knock his head against the turf. Neither played the rest of the game — Carter remained in the locker room, Cotton stood on the sideline in pads, without his helmet.

Cotton and Carter combined for 142 of Idaho’s 224 first-half yards. Carter was making defenders miss; Cotton frequently was open. The Vandals only managed 163 yards after intermission, more than 50 in garbage time. It was a simillar feel to the one UI experienced in its 24-0 loss Oct. 12 at Portland State. Without their two propellants, the Vandals’ offense obviously lost air then, and did again at Washington-Grizzly Stadium, leaving Cutrell Haywood the lone, consistent offensive weapon.

FLAGGED — Idaho’s been penalized 93 times for 818 yards this year, the most in the Big Sky and in the bottom 10 of the FCS. It was flagged 14 times for 84 yards against the Griz. 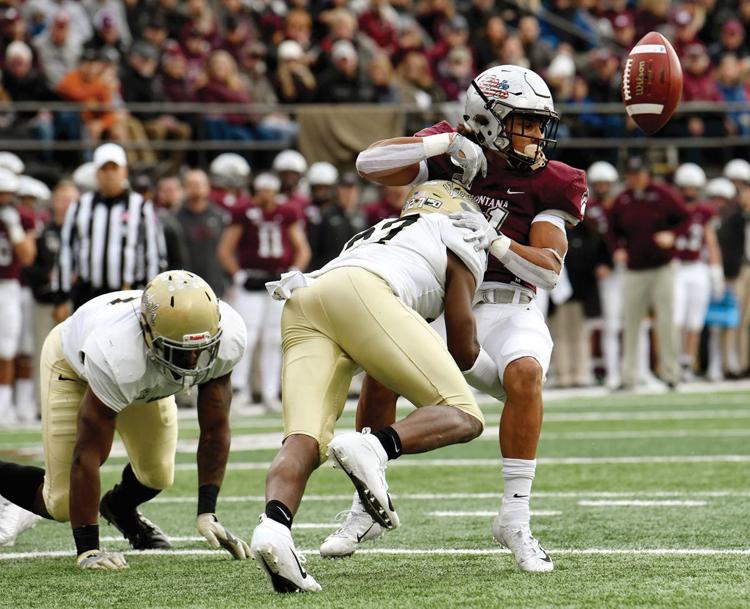 Return to “Griz Football and the FCS”

Jump to
Copyright © Missoula Media
eGriz.com is privately owned/operated and not associated with the University of Montana
Brought to you by: Backyard Tap House | Florence, MT Restaurant & Bar