Enough said for that play call. I know it will be moved but I figured it was appropriate for this site.
"Once you've wrestled, everything else is easy"--Dan Gable
Top

That call probably trumps anything I've seen anywhere ever in terms of being a "WTF?!" moment.

I'm not a Seattle fan either...hell, Seattle destroyed my favorite team last year in the Super Bowl. Still, as soon as I saw Wilson drop back to pass I said "What the [#]f###?!? WHY?!?"

2nd and goal from the 1, have a timeout, have plenty of time, have Marshawn Lynch...

New England got a gift that's for sure with that boneheaded call.
Top

I have never seen such a bonehead call as that!

Whoever made it needs to be tar and feathered.
Top

nzone wrote:I have never seen such a bonehead call as that!

Whoever made it needs to be tar and feathered.

We have been through some bonehead play calling in the MD era, but I like to think that this was far and above the level worst call I have ever seen. This even trumps booger's kicking twice in a game fiasco. At least that didn't cost the Griz a national championship. I was stunned.
Top

The Seattle message boards are calling for the OC's head over that call. I don't follow Seattle too closely but there sure isn't a lot of love for that guy. I think I see why now.

Also saw this posted which I thought was kind of funny.

Had to add this one. Seattle fans are not pleased with their OC. Quite a few edits on his wiki page even. Below is one of the more tame ones that's since been reverted

I'm not a fan of vandalizing a wiki page but holy shit some of the edits I've found in the history are hilarious. Reminds me a bit (on a much smaller scale though) of when someone tried to sell Pflugrad on Craigslist after his first season here. 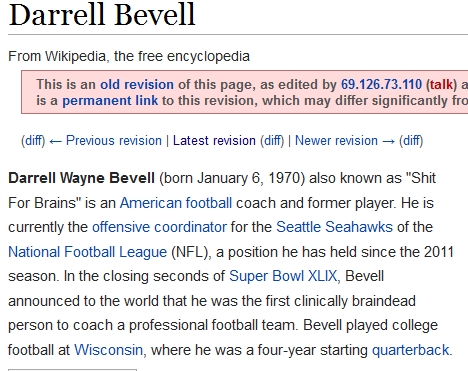 As a Hawks fan since the 80's, I just have that kicked in the gut feeling, like when I was playing Little Griz and it really happened... The OC, if he is the one making the call, obviously doesn't want a HC job...
The Only Thing Congressional "Leaders" Do Is Rename Post Offices and Highways
Top

Just saw a twitter post from a Sea reporter saying Bevell said Lockette could have tried harder to get the ball... (Not verbatim, I was too pissed to keep that tab open)
The Only Thing Congressional "Leaders" Do Is Rename Post Offices and Highways
Top

Just proves that NFL coaches know not that much more than most DII head coaches, I have been saying that for the last decade and tonight is just other cherry on the sundae.
Top

it would been called brilliant!!
Who threw the ball?
Everyone on the field, in the stadium, in the football world knew Lynch was going to get the ball. He would have been stopped.
"I pledge allegiance to the flag of the United States of America, and to the Republic for which it stands, one Nation under God, indivisible, with liberty and justice for all."
Top

clawman wrote:it would been called brilliant!!
Who threw the ball?
Everyone on the field, in the stadium, in the football world knew Lynch was going to get the ball. He would have been stopped.

Mythbuster: "Everyone in the football world knew Lynch was going to get the ball". Apparently someone forgot to tell the the NE secondary because they would have been crashing the LOS instead of defending a pass route. BUSTED.

You give the ball to your workhorse RB 3 consecutive times and if the Patriots stop him then they deserved to win and nobody calls you a bonehead. They may find other names but if arguably your best offensive player can't get half a yard in three tries then you should lose. At the VERY least, if you thought NE was going to stack the box you play action to Lynch to freeze the secondary for a fraction of a second so your receivers can get a sliver of separation. The VERY WORST thing to do is a straight pass to the middle of the field. I'd bet in goal line situations it has to be one of the lowest percentage plays possible. (It would be interesting to ask someone who keeps track of such things and as they say, with a pass three things can happen and two of them are bad). Nope, it was simply one hell of a time for a rectal-cranial inversion and will go down as one of the worst play calls in Superbowl history.

Clawman, tell your uncle Darrell he blew it.
Top

Seattle coaching staff better prepare for some tar and feathers upon their return to Seattle. Wow. Just wow...
Top

Called the read - option. They scored using that against Green Bay and Wilson was not touched. You have 1 time out left. Run the read-option, if they stop you there is the time out with about 25 seconds left. Throw on 3rd and goal if you have to as if is incomplete you have 4th and goal. Not running on 2nd and goal made no sense and the NE DB made a great play on the ball.
So Let me get this straight.....Muslim terrorists fly planes into buildings and we are not supposed to judge all Muslim's for the actions of a few. A few crazy Americans commit heinous acts with guns but it is OK to condemn all gun owning Americans.. there is our congress for you.
Top

Hero to goat. He gets millions for making these calls. It entertainment. Another day, another time....50+ years ago, a quote originated, I'm sure everyone here has heard it.....

"Two plays later Wade threw another pass. The ball was batted into the air and Aggie linebacker Jerry Hopkins intercepted at the Texas 49."...from a column by Bud Shrake in the Dallas Morning News in 1962.

You could almost hear (Darrell)Royal repeating his maxim: “When you throw a pass three things can happen to it, and two of them are bad.”
Top

This is a surprise to people after he handed the national championship to Texas when he was at USC?

Turn up the Eagles, the neighbors are listening.
Top

The more bad calls you make the more chance you have of losing. :06 left at the 11 yard line one little tip and last 2 seconds run off the clock no points. You have a 90%+ chance of scoring with Lynch vs weak goaline defense with 2 carries. You throw into traffic you lose. One works one doesnt... I GUARANTEE you Allatoona gives it to Holimon OR fullback and score vs anyone including patriots and especially east paulding
http://www.sportshaveballs.com
Top

Brock Huard was going off today about Lynch being "Hall of Fame" for his carries at the one. Really? 1 for 5 from the one yard line for all of the entire season and that is HOF material? Lynch can only get one lousy yard, three feet, one time for every five attempts, for the entire season, and thats HOF stuff???? You cant get one yard - you deserve to lose.
my two favorite teams are The Griz and who ever is playing the bobkitties
Top
Post Reply
19 posts • Page 1 of 1

Return to “Griz Athletics and Beyond”

Copyright © Missoula Media
eGriz.com is privately owned/operated and not associated with the University of Montana
Brought to you by: Backyard Tap House | Florence, MT Restaurant & Bar